Get quality, peer-reviewed studies like this one delivered straight to your inbox - for free!

Estimated Impacts of a $170 Carbon Tax in Canada

Canada will have 184,000 fewer jobs, and the employment loss will be felt nationwide.

Canada’s economy will shrink by 1.8% nationally, though it will vary by province. That would represent a loss to the economy of $37.8 billion in today's dollars.

To maintain the current carbon tax rebate to Canadian households, the federal and provincial deficits will increase by $22.1 billion annually.

And these increases fall disproportionately more heavily on lower-income households. 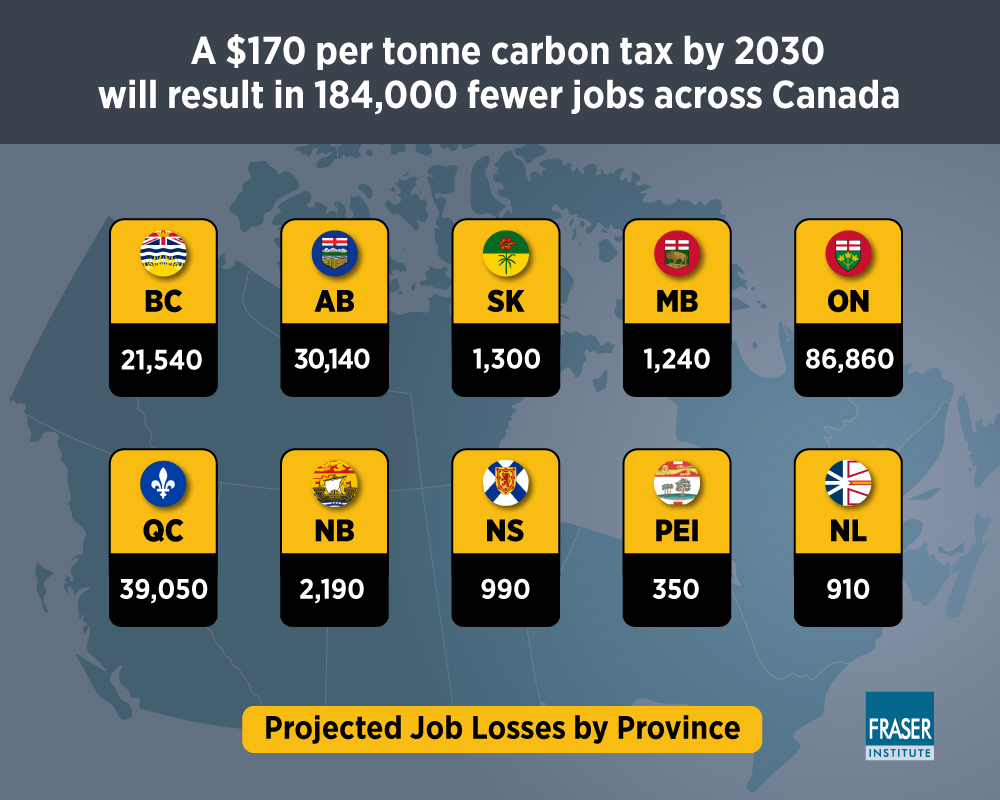 The higher carbon tax will lead to a 0.8% reduction in employment, which is just over 184,000 jobs nationally. Ontario and Alberta experience the largest percentage decline in jobs, with Quebec and B.C. close behind.

The government claims that the higher carbon tax will have “almost zero” impact on GDP. The independent study concluded that GDP (adjusted for inflation) would be reduced by 1.8% even after taking account of the tax rebates. In today’s dollars, that would represent a loss to the economy of $37.8 billion.

A higher tax will result in higher costs. The federal government maintains that by rebating most of the carbon tax revenue, the majority of Canadians will “most likely” find themselves better off. It is noteworthy that energy cost increases fall disproportionately more heavily on lower-income households. The study concluded that, even after taking account of the rebates and the potential stimulative effect of new spending, the purchasing power of ordinary households falls in every province.

Canada’s CO2 emissions are about 1.5% of the global total, and the government’s Healthy Environment and Healthy Economy plan would only reduce this by about one quarter, which means global emissions would not fall by much.

Go to the source - check out the peer-reviewed study Estimated Impacts of a $170 Carbon Tax in Canada.